Here is a broad explainer of the paper via breaking down its title.

The term in use for a kind of astronomy, ‘dark matter astronomy’, that has been in action since the 1980s. The word “astronomy” usually evokes telescopes pointing at something in the sky and catching its light. But one could also catch other things, e.g., neutrinos, cosmic rays and gravitational waves, to learn about what’s out there: that counts as astronomy too! As touched upon elsewhere in these pages, we think dark matter is flying into Earth at about 300 km/s, making its astronomy a possibility. But we are yet to conclusively catch dark particles. The unique challenge, unlike astronomy with light or neutrinos or gravity waves, is that we do not quite know the character of dark matter. So we must first imagine what it could be, and accordingly design a telescope/detector. That is challenging, too. We only really know that dark matter exists on the size scale of small galaxies:

metres. Whereas our detectors are at best a metre across. This vast gulf in scales can only be addressed by theoretical models.

How heavy all the dark matter is in the neighbourhood of the Sun has been ballparked, but that does not tell us how far apart the dark particles are from each other, i.e. if they are lightweights huddled close, or anvils socially distanced. Usually dark matter experiments (there are dozens around the world!) look for dark particles bunched a few centimetres apart, called WIMPs. This experiment looked, for the first time, for dark particles that may be  30 kilometres apart. In particular they looked for “MIMPs” — multiply interacting massive particles — dark matter that leaves a “track” in the detector as opposed to a single “burst” characteristic of a WIMP. As explained here, to discover very dilute dark particles like DEAP-3600 wanted to, one must necessarily look for tracks. So they carefully analyzed the waveforms of energy dumps in the detector (e.g., from radioactive material, cosmic muons, etc.) to pick out telltale tracks of dark matter.

The largest dark matter detector built so far, the 130 cm-diameter, 3.3 tonne liquid argon-based DEAP (“Dark matter Experiment using Argon Pulse-shaped discrimination”) in SNOLAB, Canada.  Three years of data recorded on whatever passed through the detector were used. That amounts to the greatest integrated flux of dark particles through a detector in a dark matter experiment so far, enabling them to probe the frontier of “diluteness” in dark matter.

By looking for the dilutest dark particles, DEAP-3600 is the first laboratory experiment to say something about dark matter that may weigh a “Planck mass” — about 22 micrograms, or 1.2

— the greatest mass an elementary particle could have. That’s like breaking the sound barrier. Nothing prevents you from moving faster than sound, but you’d transition to a realm of new physical effects. Similarly nothing prevents an experiment from probing dark matter particles beyond the Planck mass. But novel intriguing theoretical possibilities for dark matter’s unknown identity are now impacted by this result, e.g., large composite particles, solitonic balls, and charged mini-black holes.

The experiment did not discover dark matter, but has mapped out its masses and nucleon scattering cross sections that are now ruled out thanks to its extensive search. 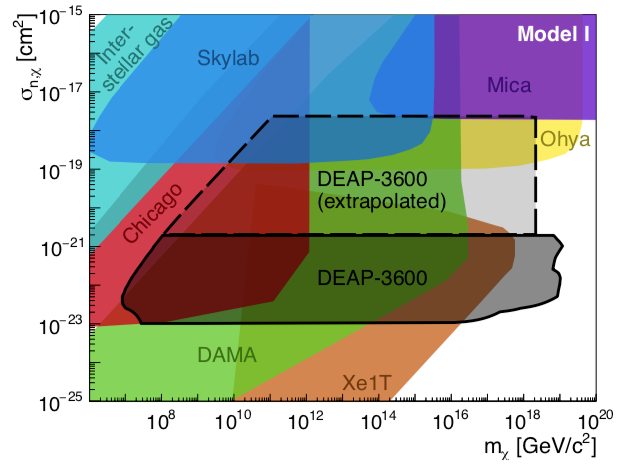 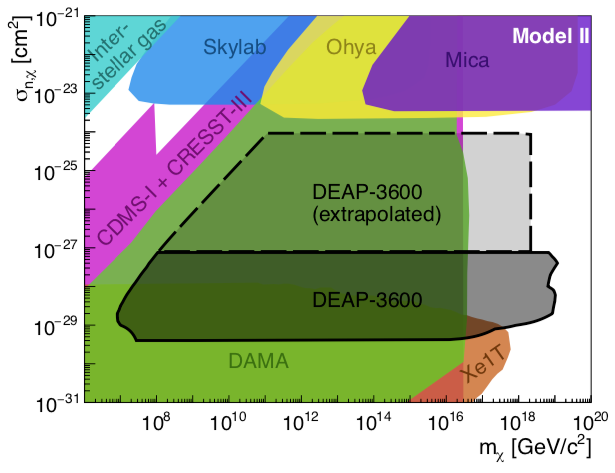 Figure above: For two classes of models of composite dark matter, DEAP-3600 limits on its cross sections for scattering on nucleons  versus its unknown mass. Also displayed are previously placed limits from various other searches.

[Full disclosure: the author was part of the experimental search, which was based on proposals in [a] [b]. It is hoped that this search leads the way for other collaborations to, using their own fun tricks, cast an even wider net than DEAP did.]

[4] Look out for Benjamin Broerman‘s PhD thesis featuring results from a multi-scatter search in the bubble chamber-based PICO-60.

Nirmal Raj is a postdoc at TRIUMF National Lab whose research is centered beyond the Standard Model, mostly on dark matter and new physics at the electroweak scale, and occasionally within the Standard Model in the form of supernova neutrinos. His favorite things include neutron stars, underground experiments, and particle colliders. Also, cryptic crosswords, writing short stories, and hiking in the Pacific Northwest.